In this month’s research update we summarise research articles on wind farm impacts on migratory birds; a state-of-the-art detection system for reducing bird collisions with wind turbines; the first record of a tracked Egyptian vulture being hunted and traded in West Africa; and the potential negative impacts for scavengers as apex predator populations recover.

The authors of this study examined monthly migratory soaring bird abundance in relation to long-term mortality rates at 21 wind farms located near the Strait of Gibraltar – the most important migratory bottleneck in Western Europe and also an important region for wind energy generation in Spain. A previous study by some of the same authors revealed that the collision rate of birds with wind turbines in this region was among the highest ever recorded for raptors, with griffon vultures being the most frequently killed species.

Although monthly bird abundance was not directly related to the number of fatalities over the year, mortality rates peaked in the late summer and early autumn, coinciding with the peak autumn migration period. Griffon vultures were the most commonly killed species, with 416 recorded fatalities in the 9-year study period. A second mortality peak occurred in the breeding season, when a higher proportion of adult birds were killed.

The authors suggest that the number of fatalities during autumn migration constitute only a small proportion (1%) of the total migrating population, and that most of the deaths are of juveniles; but that fatalities during the breeding season represent a substantial proportion (6%) of the local breeding population, with population-level impacts being likely at the local scale. [It is worth noting that the wind farms closest to the Strait, where mortalities of migrants might be expected to be higher, were not included in the analysis – Fig. 1 below]

Vultures are particularly susceptible to collisions with wind turbines due to their large size, limited manoeuvrability and tendency for wind farms to be located where they occur in high densities (often due to favourable topography and wind currents).  It is therefore essential that new methods for reducing bird collisions at wind farms are developed, as discussed in the next article.

The authors of this study tested the ability of a camera-based monitoring system (IdentiFlight) to detect, classify and track birds in comparison to human observers, in order to inform the potential development of an automated system to “power down” wind turbines if eagles are deemed at risk of collision.

IdentiFlight consists of a network of tower-mounted camera systems, 7-10 m above the ground, which detect moving objects through Wide Field of View (WFOV) cameras and track them, using algorithms to classify objects within a 1000 m radius as eagles or non-eagles.

The camera system detected 96% of the bird flights detected by human observers, and detected 562% more birds than observers, most likely because the human observers’ ability to detect birds declined sharply with increasing distance. While only 6% of eagles were misclassified as non-eagles by the camera system, 28% of non-eagles were misclassified as eagles. The median distance of classification of eagles was 793 m in a median time of 0.4 seconds since detection.

The results of this study suggest that automated cameras could be an additional tool for detecting large birds such as eagles and vultures in close proximity to wind farms, enabling effective powering down of turbines to reduce the risk of collision. It will be very interesting to see how such tools develop over time.

The LIFE+ project “The Return of the Neophron” and the “Egyptian Vulture New LIFE” project have recently published an article describing how they discovered that a juvenile Egyptian vulture (Paschalis) was killed by a vulture hunter in its wintering grounds in Niger, having completed its migration from Greece.

The tracking data indicated that the bird had died and so the project’s partners, supported by the Sahara Conservation Fun (SCF) in Niger and the AP Leventis Ornithological Institute (APLORI) in Nigeria, launched investigations and interviews with local communities that revealed that the vulture had been shot and killed by a Nigerian hunter at a water hole in Niger, to be sold at a fetish market in Nigeria.

Although the utilisation of vulture parts was not apparent in Niger, it was confirmed that hunters regularly kill vultures there to be traded in Nigeria for belief-based use, despite being protected in both countries.

This type of illegal killing of vultures is possibly widespread in the Egyptian vultures’ wintering grounds in West Africa, and it will be essential to assess and mitigate the threat through careful on-the-ground investigations and appropriate awareness campaigns via the Egyptian Vulture Flyway Action Plan and the Multi-Species Action Plan to Conserve African-Eurasian Vultures.

The corrupted carnivore: how humans are rearranging the return of the carnivore-scavenger relationship. Pauli et al. 2018. Ecology.

This short article discusses the changing interactions between mammalian predators, livestock, scavengers and humans over time. The authors suggest that while the recovery of apex carnivores in parts of their ranges has the potential to restore the ecosystem services that they provide, there is also great potential for conflict with people if they prey on livestock.

This has important implications for scavengers, particularly vultures, which regularly feed on predated carcasses when they are available. For example, the authors describe the recent poisoning of 34 A
ndean condors in Argentina when they fed on a carcass laced with carbofuran successfully aimed at killing a puma.

As apex predator populations recover it is possible, therefore, that the scavenger-predator relationship will change from being positive (i.e. providing carrion) to negative (i.e. stimulating increased poisoning), and the authors call for further research into the actual and potential outcomes of predator recovery, the frequency of poisoning events and the socio-ecological consequences.

This article is very relevant to the VCF’s anti-poisoning work, particularly through the Balkan Anti-Poisoning Project. 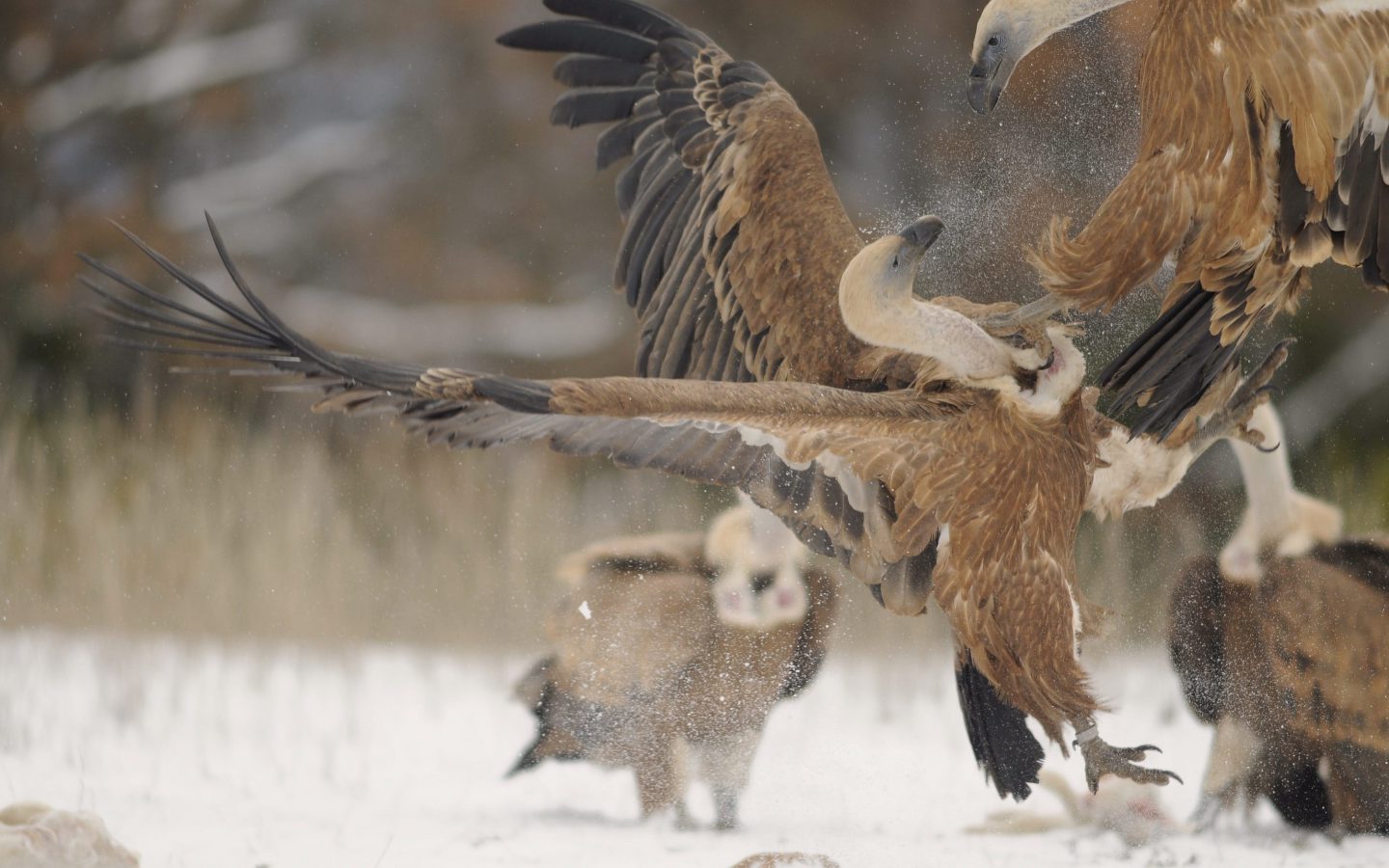 Did we underestimate the complexity of the vocal repertoire of Griffon Vultures? A case study using the