The Bearded Vulture is Europe’s rarest vulture. Still, the population of the species on the continent is on the rise thanks to extensive reintroduction and conservation efforts. It is an unmistakable bird, both for its breathtaking features and its unique behaviour. Once you observe and learn more about this bird, you are truly captivated. 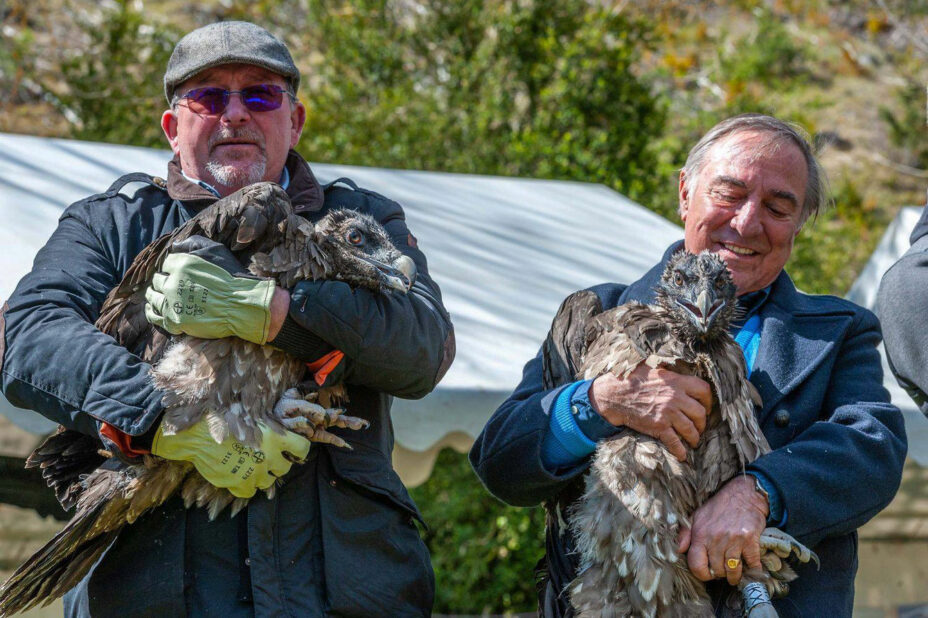 Bearded Vultures were once found in all the mountain ranges of southern Europe from western Spain to the Balkans. Over the 19th and 20th Centuries the Bearded Vulture was intensively persecuted and combined with a decline in wild mountain herbivore population and changes in farming practices, the population becoming extinct across nearly all of its European range.

Whilst today the species occupies a small percentage of its former range, in the Pyrenees, Sierra Nevada and Alpine mountain ranges and small populations on the islands of Corsica and Crete, the population in western Europe is increasing.

The beautiful features of Bearded Vultures are many and get even more exciting with age. As a chick, they weigh only 150 grams and have dark down feathers. From a fledgling onwards until adolescence, their feathers have a predominantly dark brown colour. When they reach four years old and have already undergone 1-2 moulting, their head, neck, chest and most of their body become increasingly white. That is if they would not colour themselves since they are bathing extensively in bodies of water containing iron oxide and slowly their feathers are dyed rusty orange. The reason behind this behaviour is still a bit of a mystery. Some speculate that it’s just decorative where others claim that iron oxide protects eggs from infection, but these =are not confirmed. However, white Bearded Vultures are relatively common in some mountain ranges such as the High Atlas in Morocco, possibly because they cannot find iron soil but are quite rare in regions like the Alps. Further to this, captive birds are white in colour unless human keepers provide iron-rich puddles where they can bathe and get their orange-red colour.

Two hundred years ago, Bearded vultures were found in all Southern European mountain areas, from Western Spain to the Balkans. A decrease of food availability (chamois, roe deer, ibex), changes in animal husbandry and a bad reputation caused a steady population decrease. The name ‘lammergeier’ (or ‘quebrantahuesos’ in Spanish, which means bone breaker) reveals it: people thought that the bird killed lambs and sometimes even small children. Bearded vultures were hunted down fanatically, and in the Alpine region there was even a bounty for each animal killed. The last living specimen in this area was shot in 1913.

Unlike the myth, Bearded Vultures do not hunt live prey. It is, in fact, the only vulture that has specialised in feeding primarily on bones of dead animals, more specifically about 85-90% of its diet. The bird is even capable of swallowing and digesting bones the size of a sheep’s vertebrae. If bones are too big to swallow, the bird gains great heights of up to 100 metres and drops bones onto rocky surfaces to shatter them into eatable pieces – a practice that might take up several years to master. This unique eating habit requires many adaptations, which differentiates the species from other vultures and makes Bearded Vultures an essential part of the ecosystem.

The reproduction of Bearded Vultures is a slow and challenging process. It takes up to 5 to 7 years for birds to reach sexual maturity, but breeding success usually occurs from the age of 8 onwards. Pairs in the wild typically lay 1-2 eggs, but if both hatch, only the older and stronger chick survives due to evolutionary cainism. Nestlings are aggressive and competitive, and as eggs are laid with 5-7 days apart, the older chick is stronger and does not allow the weaker one to feed and so it eventually dies. Therefore, a breeding pair or sometimes trio can only raise one young bird every year.

Bearded Vultures are the earliest breeders of the four European vulture species. Bearded Vultures in the Alps usually start to lay eggs in late December and continue up until February, with parents sharing brooding responsibilities until the chick hatches after an average of 54 days. This special breeding period is related to the diet of the chicks, which cannot digest bone, so the species has evolved to hatch towards the end of winter when there is potentially a plentiful supply of food. This includes animals that died from avalanches and are then exposed to the thawing snow or animals that die towards the end of the season from not surviving harsh conditions, leaving plenty of animal carcasses for the parents to feed their chicks.

Species Action Plans are very important strategic documents that frame the priorities for further species conservation work. They are created by conservation partners, scientists, charities, governments and local groups and are tools for identifying and prioritising measures to restore the populations of vultures across their range. They provide information about the status, ecology, threats and current conservation measures for each species of vulture and list key actions that are required to improve their conservation status.

The Vulture Conservation Foundation co-developed the Vulture Multi-Species Action Plan (Vulture MsAP), which was adopted by the United Nation’s Convention on the Conservation of Migratory Species of Wild Animals (CMS), aiming to conserve all 15 African-Eurasian vultures species, including the Bearded Vulture. are found. Further, the VCF updated old species actions plans together with partners within the LIFE EUROSAP project, including the  European Species Action Plan for the Bearded Vulture.