Two hundred years ago, Bearded Vultures were present in all the mountains of southern Europe, from Western Spain to the Balkans as well as in the Alps. Today, the species is only found in the reintroduced populations of the Alps and Andalusia, in the Pyrenees, and isolated populations in Crete, Corsica and the Moroccan Atlas. With the numbers of Bearded Vultures increasing in the Alps, the Vulture Conservation Foundation (VCF) and its partners started to plan the end of the reintroduction project there. Even though the Alpine population of the species is considerably large, it comes from a low number of founders and is genetically less variable than a long-lasting wild population. So to improve the genetic diversity through the settlement of movements between the different nucleus of population, reintroduction actions that would link the populations of the Alps and the Pyrenees mountain ranges began since 2010. The LIFE GypConnect project launched a few years after in 2015, which is led by Ligue pour la Protection des Oiseaux (LPO) carries on this project to establish a breeding population of Bearded Vultures in the Massif Central and the Pre-Alps to help achieve the goals stated above.

The captive-bred Bearded Vultures are released with the ‘hacking method’, which entails placing young birds at an artificial nest in suitable habitat to acclimatize to the natural environment before they take their first flights.

The LIFE GypConnect project aims to promote the movements between the Alpine and the Pyrenean populations by reintroducing the species into the mountains of the Prealps (Drôme region – Baronnies and Vercors) and Massif Central (Lozère, Aveyron, Gard, Hérault regions), using these mountains as a corridor to connect the Alps and the Pyrenees. The project is built on the partners’ and VCF’s decades of experience breeding, releasing and reintroducing Bearded Vultures into the wild. Throughout the six-year project, captive-bred birds from the VCF coordinated Bearded Vulture Captive Breeding Network (EEP) are being released in the Regional Natural parks of Grands Causses, Baronnies and Vercors and in the Cevennes National Park. The Bearded Vulture EEP and the VCF began providing birds before the formation of LIFE GypConnect. So far, 43 birds were released in total – 23 birds in Baronnies and Vercors since 2010) and 20 in the Grand Causses since 2012. Today, there are 3-4 territorial pairs present in the area of the programme, more specifically 2-3 in Aude and 1 in the Grands Causses.

Adonis and Layrou, two male reintroduced Bearded Vultures, have formed a pair in the Grands Causses and were seen brooding during the last breeding season! The LIFEGypConnect team is now hoping for an adult or subadult female to join the pair to form a trio in the hope that they will be able to breed successfully in the future. 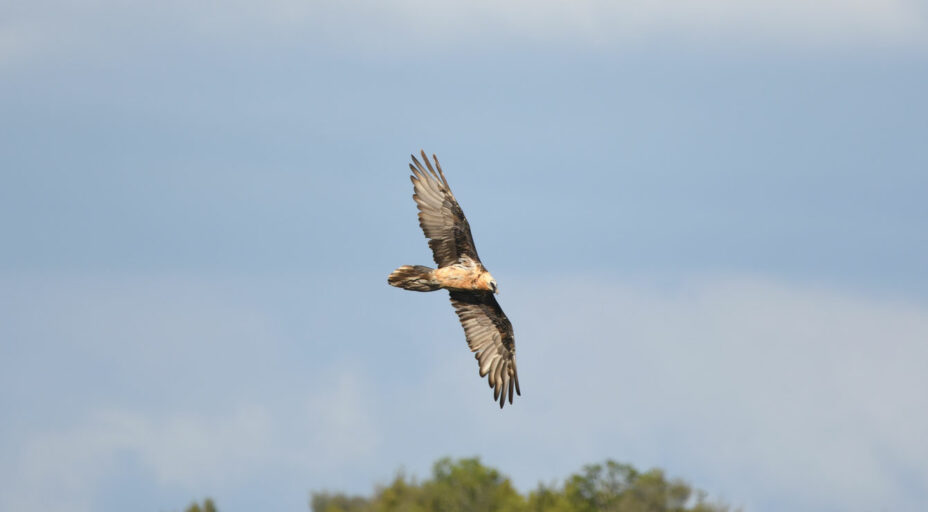 This reintroduction project is an important part of the VCF’s strategy to restore the species in Western Europe. Now that the Alpine population is firmly re-established and with the Pyrenean population saturating, Andalucían population growing, this project will help support the movements of individuals of this species between Iberia, the Pyrenees and the Alps. This action will consequently promote the gene flow, which will also help to increase the genetic diversity of the Alpine population, and thus accelerate the end of the reintroduction project there. The VCF is responsible for updating the release protocol, selecting the sites, coordinating the Bearded Vulture EEP and assigning the captive birds to different locations for release. Ahead of the release, birds are equipped with GPS tags, and the VCF and partners are closely tracking their movements to identify threats and react swiftly if a bird needs any assistance. Further, the VCF analyzes the movements of the birds through the genetic monitoring of the population, which helps understand how the population is performing and what actions work and which don’t, helping inform future conservation actions.