Larzac is still up north – now in northern Germany!

The young male bearded vulture – named Larzac – that left the Grands Causses two weeks ago, made a complete tour of the Netherlands!

As shown on the map, Larzac visited almost all corners of the Netherlands. After visiting the Wadden islands in the north (Ameland and Schiermonnikoog), he returned to the same area he had stayed before.

Following some consultation between the Dutch volunteers that are following Larzac (Hans Pohlmann & Jaap Denee) and the VCF experts, it was decided to provide food for Larzac so that he can gain energy for the trip back home. This was an emergency action as it was assumed that Larzac did not find food on his own in the last weeks and to make sure that he can continue his journey on his own.

Our Dutch colleagues placed a small amount of additional food for him, which he found quickly.  He stayed in the area for a couple of days and on the morning of June 28th he left again. He flew straight over one of the most densely populated areas in Europe: over Amsterdam, Leiden and Rotterdam, and he roosted for the night in Hoek van Holland. He travelled through this area totally unnoticed. On the morning of June 29th he took off again and flew around 200 km southeast, into Belgium. The right direction towards home! Unfortunately, the weather was unfavourable for him to continue south. On the contrary, after spending a day in Belgium, he flew north again far into the Netherlands. He spent the night near the German border, in the Bergher Forest. Heavy rain showers totally soaked the poor bird… Today, he left the Netherlands, and flew northwards into Germany. Hopefully he will turn south again soon…

Flying great distances and exploring new areas is normal for young bearded vultures. To fly all the way to the north is not that common, but it happens every now and then, usually in Spring. This summer bearded vultures have already been seen in Belgium, the UK, Denmark, and Poland-Ukraine.

The normal home of bearded vultures are the mountainous regions of Europe, Asia and Africa. There they find the perfect conditions for flying, steep walls for breeding & open landscape to search for bones to feed on. Let’s hope Larzac finds the way back to the mountains!

The VCF is reintroducing bearded vultures in three mountain ranges – the Alps, Andalusia, and in the Massif Central-Grands Causses – the latter project is locally managed by LPO, and is now financed by an EU LIFE grant – LIFE GYPCONNECT – see http://gypaetebarbu.fr/life-gypconnect/

The VCF would like to thank Hans Pohlmann and Jaap Denee, and many other Dutch birdwatchers, who kept an eye for Larzac on his stay in the Netherlands.

The Bearded Vulture Eglazine returned to the Netherlands! Even though wandering is normal for young individuals

On Monday, 9 May, the first 2022 Bearded Vulture releases into the wild took place! As 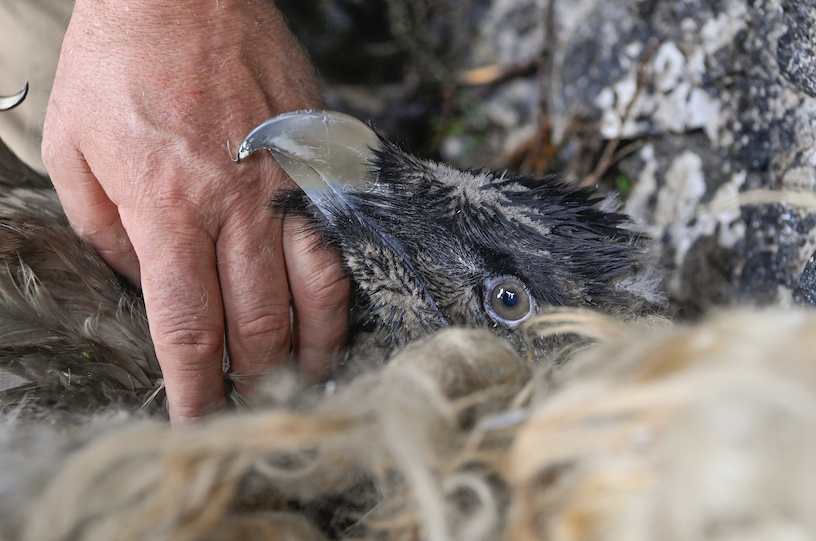 After a long and productive breeding season in captivity, it is time to start releasing young