BalkanDetoxLIFE: Tackling the problem of animal poisoning in Serbia

Engaging with relevant stakeholders about the problem of animal poisoning in Serbia is one of the most important ways we can help shift behaviour and attitudes about this issue. That is why the Bird Protection and Study Society of Serbia (BPSSS) recently organized educational workshops in Apatin and Novi Pazar as part of the BalkanDetox LIFE project. The workshops raised awareness about the poisoning of wild animals and the reasons that lead to this cruel and harmful practice, which may cause adverse effects on public health and the environment.

Who are the key stakeholders?

During the workshops held in August, veterinarians, cattle breeders, farmers, civil society organizations (NGOs), tourist organizations and protected area rangers had the opportunity to get acquainted with the problem of wild animal poisoning in Serbia and the most common reasons that lead to intentional and accidental animal poisoning. The BPSSS team also introduced participants to safe practices and alternatives that can resolve conflicts without resorting to illegal practices such as poisoning.

Why do people illegally use poison baits?

The reason behind the use of poison baits is always a type of conflict, mainly between livestock breeders, farmers and game managers and carnivorous predators (wolf, golden jackal, bear, fox, and dog) that can damage livestock or game species. Poisoning can often happen by accident. For instance, when farmers use pesticides to prevent crop damage and protect themselves from insects. But these accidents can have devastating effects since bird species that feed on poisoned seeds (pheasants, partridges, cranes, doves) die and birds of prey that feed on rodents that ate poisoned seeds can also die.

Where is it urgent to tackle the problem?

Apatin and Novi Pazar were not chosen by chance as the locations for the workshops. According to BPSSS data, the most damage from poisoning can occur in the vicinity of these places. Most poisoning cases in Serbia have been recorded in the vicinity of Apatin, so it is very important to alert people of the serious damages poisoning can cause, and that by poisoning wild animals, they pollute the soil they eat from and the water they drink.

On the other hand, the region of Novi Pazar is nearby the largest nesting colony of Griffon Vultures in Serbia – Uvac. Poisoning in this area can lead to mass poisoning of these useful birds and, therefore, a lot of effort must be invested to prevent the practice of poisoning by educating the local population.

What insights did BPSSS acquire from surveys?

The BPSSS team also used the opportunity to conduct a survey among residents in these cities and their surroundings to better understand the extent and scope of the issue. “

The goal of the survey is to find out how much people are aware of the problem of poisoning. In addition, it was important to understand the additional factors that influence people not to report crimes against the environment. The respondents were people of all ages, mostly cattle breeders, farmers, veterinarians, but also casual passers-by. What is clear from the conducted survey is that when they notice a problem in their environment, they do not want to report it to the competent institutions out of fear of offending someone and causing possible conflicts in their community.

The ‘BalkanDetox LIFE‘ project aims to strengthen national capacities to fight wildlife poisoning and raise awareness about the problem in Balkan countries. It is a five-year endeavour with a €1.8 million budget, which aims to raise awareness and strengthen national capacities to fight the problem of wildlife poisoning across Albania, Bosnia & Herzegovina, Bulgaria, Croatia, Greece, the Republic of North Macedonia and Serbia. It received funding from the EU’s LIFE Programme, and it is co-financed by the Vulture Conservation Foundation, the MAVA Foundation and Euronatur, as well as by the Whitley Fund for Nature and Environmental Protection and Energy Efficiency Fund for specific actions. Project partners are the Vulture Conservation Foundation as the coordinating beneficiary, and the Albanian Ornithological Society, Association BIOM, Bird Protection and Study Society of Serbia, Fund for Wild Flora and Fauna, Hellenic Ornithological Society, Macedonian Ecological Society, Ornitološko društvo NAŠE Ptice and the Protection and Preservation of Natural Environment in Albania as associated beneficiaries. Furthermore, this project is based on Spanish best practice experience and counts with the support from the Junta de Andalucía and the Spanish Ministry for the Ecological Transition and the Demographic Challenge.

PrevPreviousBearded Vultures in the Alps break their record once again, producing the highest-ever known number of fledglings
NextEgyptian Vultures in Italy: Captive breeding and release season a successNext 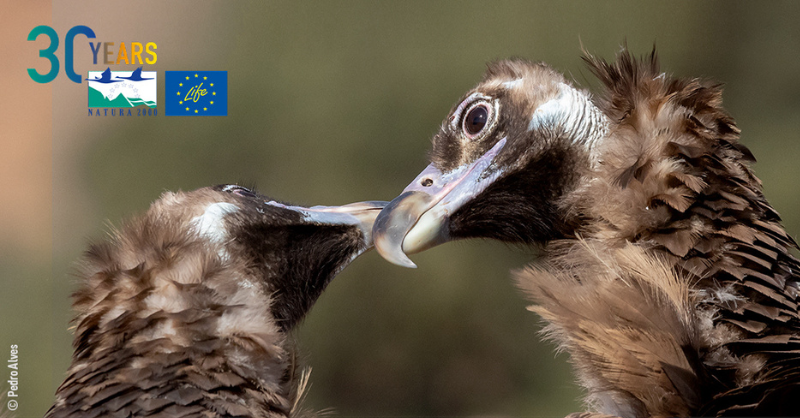